Now that we’ve built a basic understanding of how weather works and the patterns the wind follows let’s look at how we can use this knowledge to better understand weather forecasts.

For paddling in Tofino the region we’re interested in is West Coast Vancouver Island South http://weather.gc.ca/marine/forecast_e.html?mapID=02&siteID=16200

The Forecast will give us a written idea of what the winds are doing. 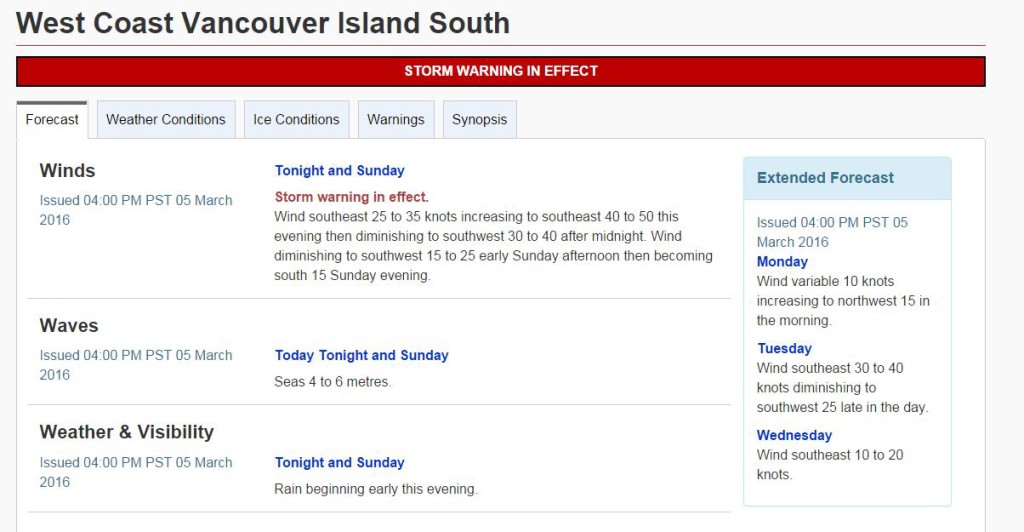 Looking at this forecast we can see winds are increasing SE as the Low Pressure approaches. Then as the Low passes by winds switch to SW. This is an example of Veering winds. Winds switching in a clockwise direction (SE –> SW–> W –> NW)

Monday night a new low pressure approaches and the  winds begin Backing… switch in a counter clockwise direction (NW –> W –> SW –> S –> SE). So on Tuesday we can expect another large low pressure to arrive. We know it’s a big low because of the strong winds.

The next tab titled Weather Conditions allow us to see what the current hourly conditions are at different weather stations. http://weather.gc.ca/marine/forecast_e.html?mapID=02&siteID=16200 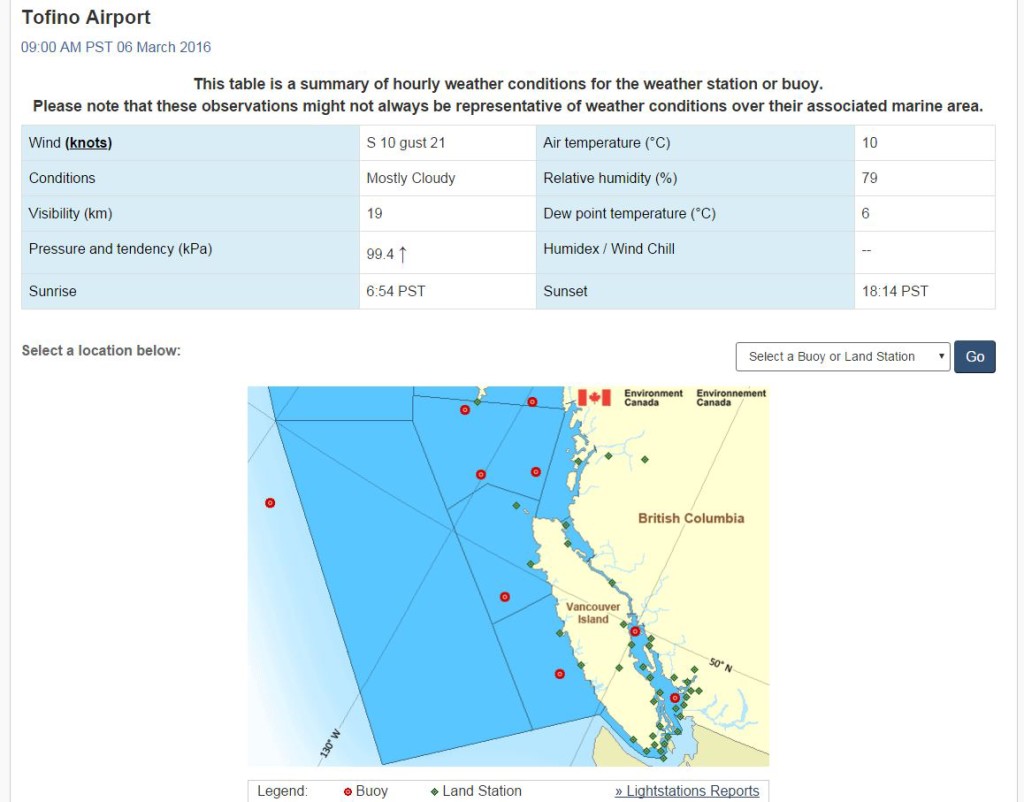 The conditions displayed above are taking place Sunday March 6 2016 at 9am.  Looking at this we see the forecast weather we were discussing earlier becoming a reality. The wind has begun veering from SE to NW, as displayed in the snap shot above we can see winds of 10 knots S gusting at 21 knots. As the wind veers, the changing conditions result in S or SW wind I often refer to as a “classic south west day.” Unpredictable weather with spurts of rain, sunshine, and even the odd rainbow. A mix of nimbostratus and cumulous clouds. 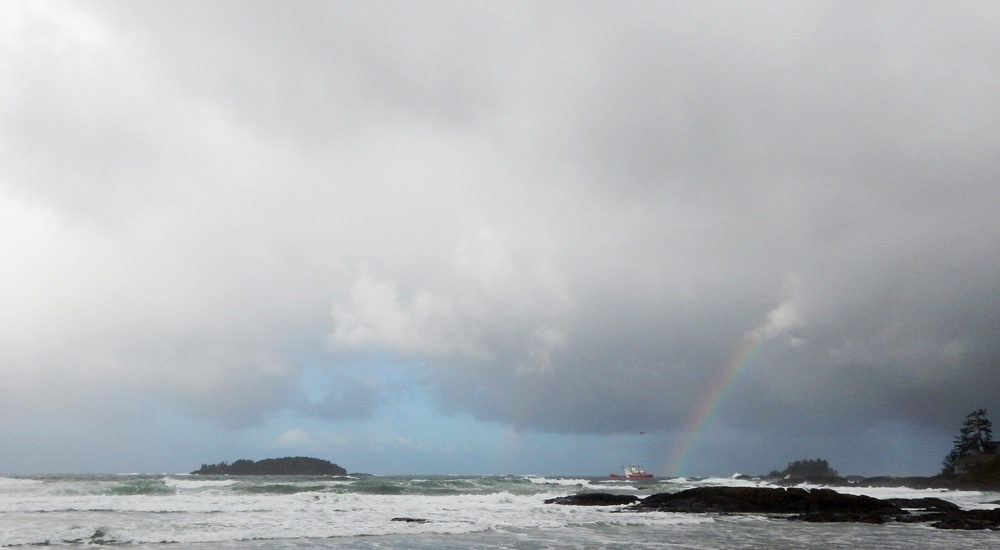 Visual representation of the weather.

Let’s see what this looks like on a weather chart. One of my favourite weather forecasting websites is stormsurf.com .There are many charts to look at. In the SUP Touring Instructor course we will go into more details about the most useful ones.

We can see through this sequence of images taken from the same forecast as above, the same weather pattern that is described above. One low pressure passing by Tofino as it deepens and moves north toward Haida Gwaii. 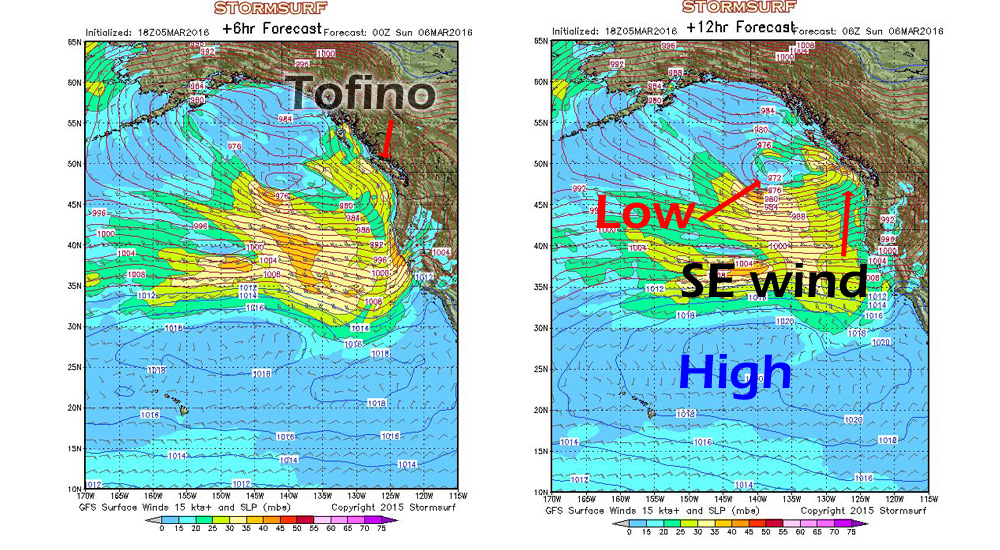 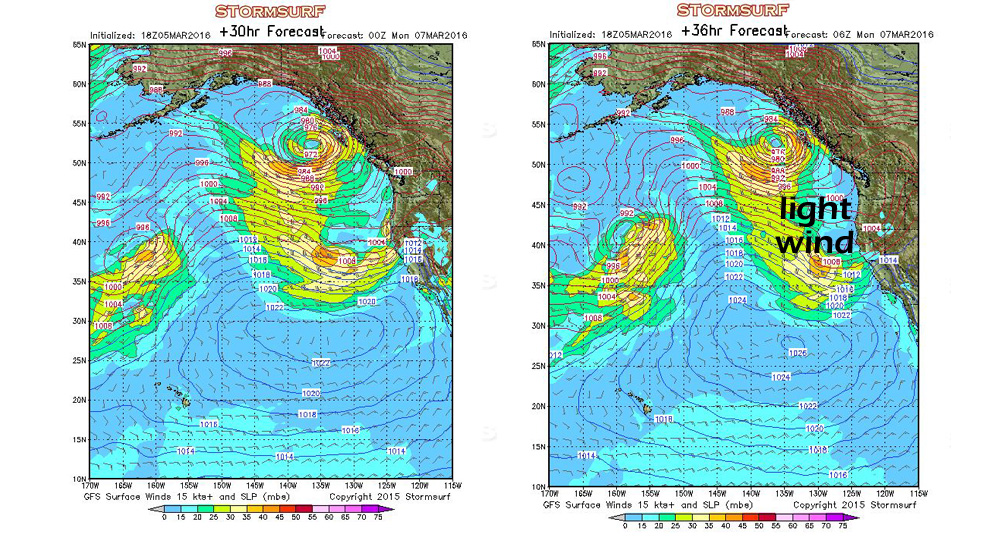 Winds switching from SE, to S to SW, then calm winds on Monday. 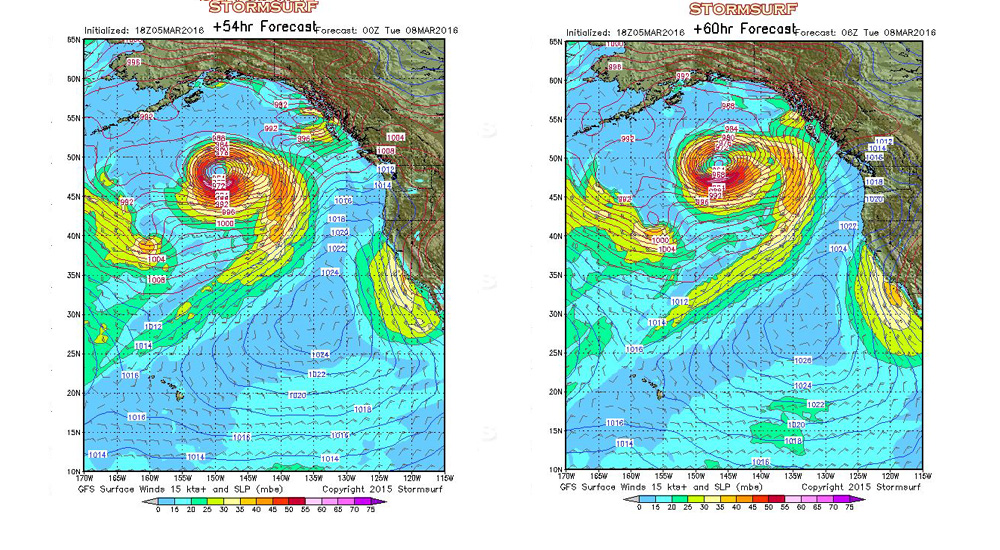 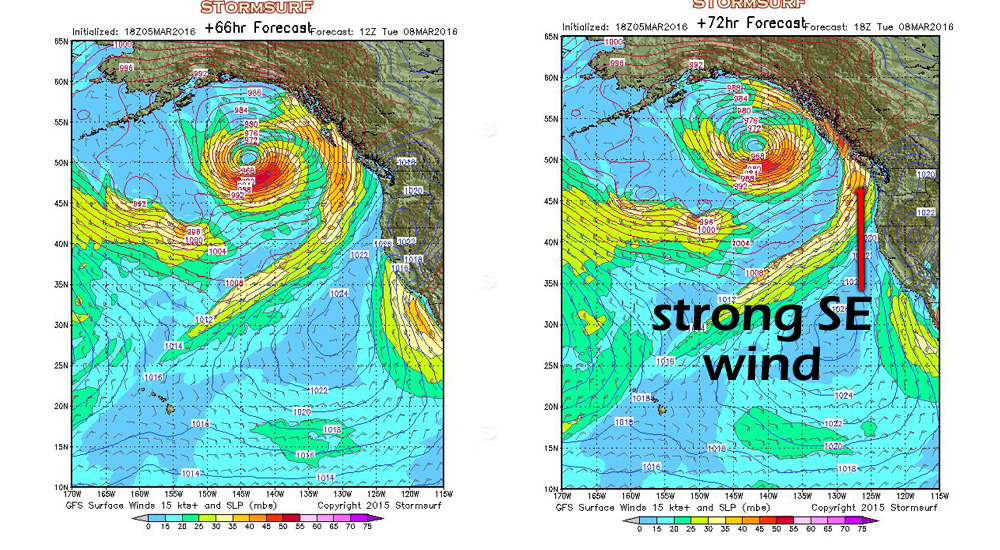 It can be hard to understand time on these charts as they use Z time (Zulu time) aka Greenwich Mean Time (GMT). http://wwp.greenwichmeantime.com/info/zulu.htm . In order to know the Pacific Standard Time the charts are referring to we must make a conversion. The following chart will help. 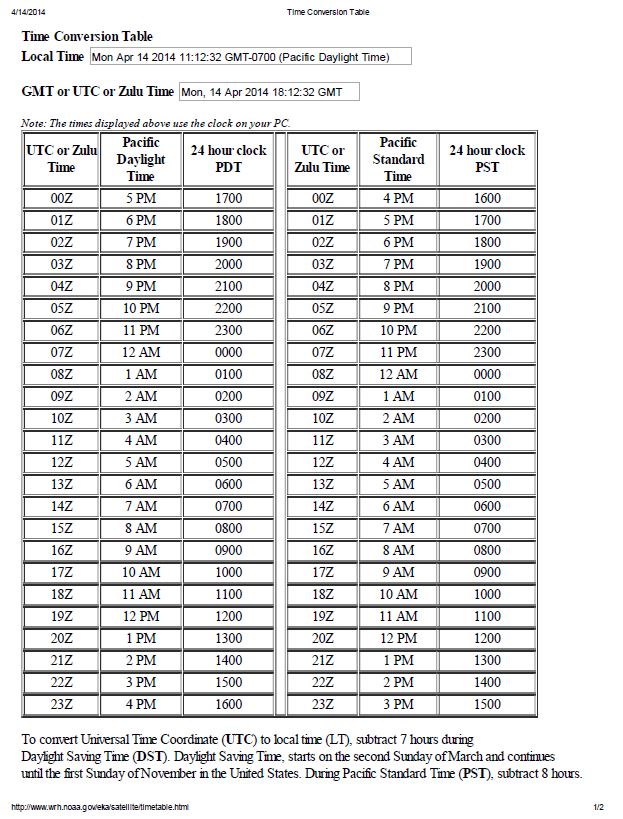 The story these charts tell we can see described in the Canadian Government Marine Weather website’s Synopsis tab. 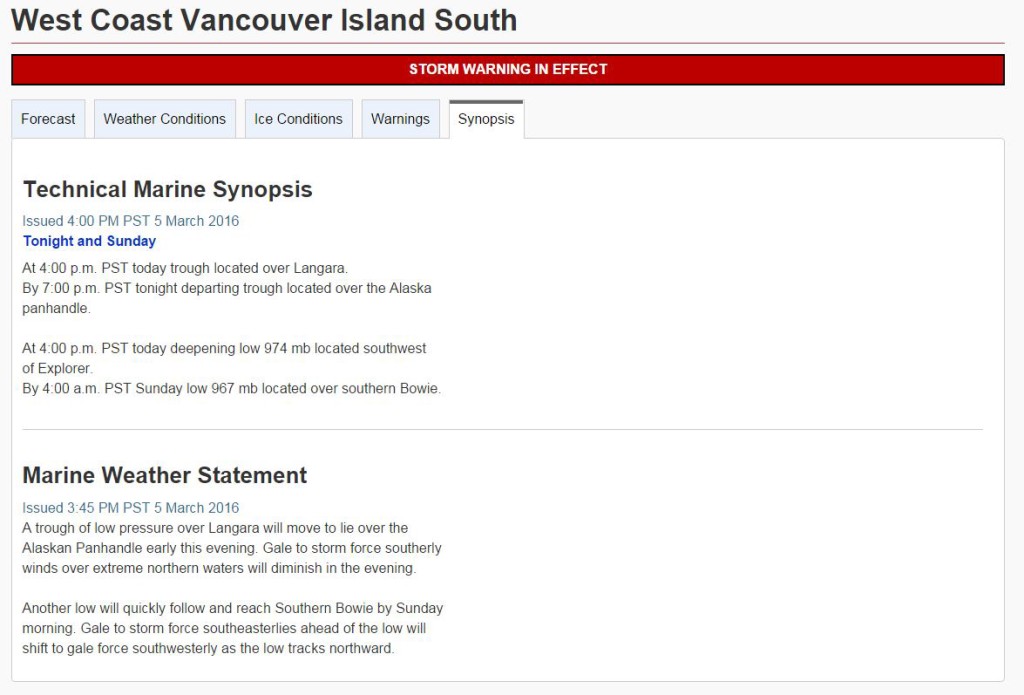 The Technical Marine Synopsis gives times and locations of moving toughs (lows) and ridges (highs). the Marine Weather Statement describes what is happening in a generalized manner. Both working together to create the same story of the weather that we see in the charts above. This Synopsis is describing what we see in the first four images as we see the deepening low move northwards.

The Marine Regions used in the synopsis can be seen on these images. 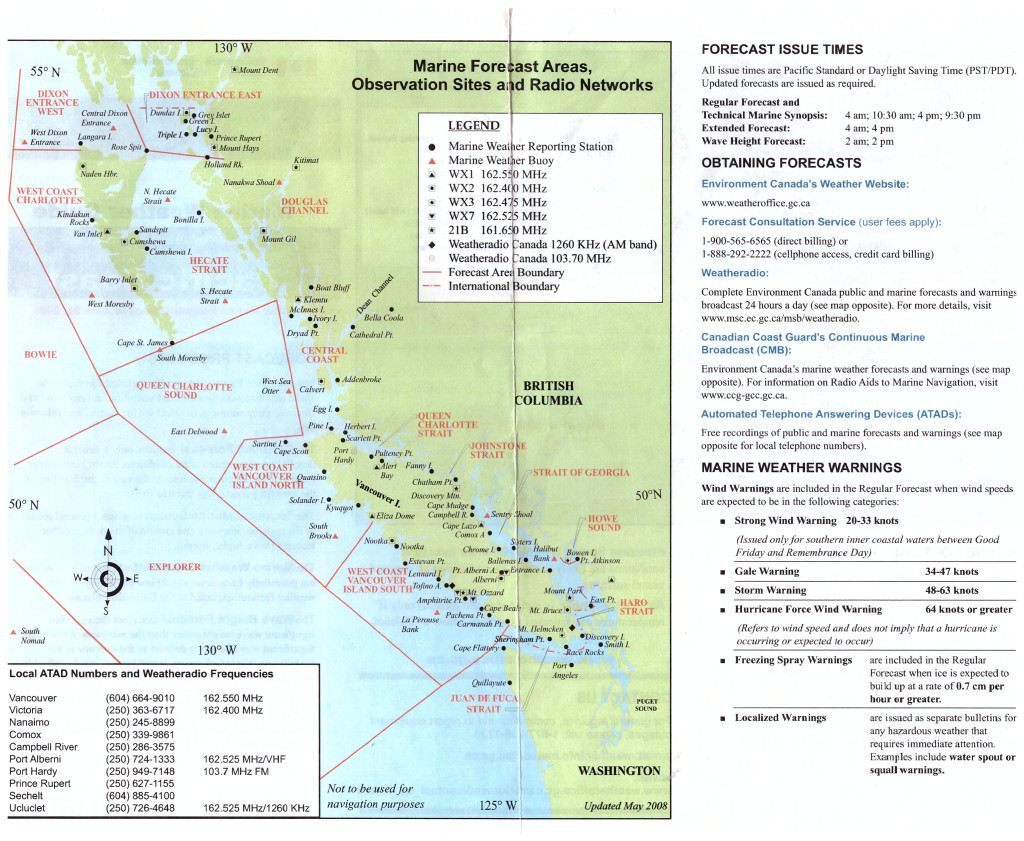 On multi-day trips in remote areas we must use the forecast delivered over  a VHF radio channel xw8 (wx refers to weather channels). This is the same forecast we see on the Canadian Government Marine Forecast website read over the radio. Familiarizing yourself with the various marine regions and understanding the way the forecast is organized will make interpreting the forecast much easier, allowing us to make educated weather predictions and paddling decisions in a timely manner while in the field.