Joe Martin, also known by his traditional name, Tutakwisnapšiƛ, grew up learning to be a canoe carver. Joe is a Nuuchahnulth man who learned to carve from his father, and alongside his brothers. The following describes some of what Joe shared with me about canoe carving and Nuuchahnulth canoes.

A carver wants to avoid wood with rot, too many knots or twist in the tree. The typical tree age for a canoe log is between 400-800 years old. Once Joe knows where he’s going to be carving, he sets up the work area. This means setting up camp, tarps, and hiking all the needed gear and tools in. In some cases when the timber is in a remote location, the carving crew camps, lives and works there. The initial shaping out of the canoe begins and often continues everyday until the canoe is dug-out. It is important to have helper workers lined up for the job depending on the size of the canoe. For a canoe over 15 feet in length having a couple helping hands is important as the canoe log must be rotated to work on different parts. Lifting the log to rotate it can be very heavy.

Once the log is dug out and the stern and bow piece have been added on; there is a steaming process which increases the canoes’ hull side flare  and gives the bottom hull a bit of rocker.  The added flare on the sides is usually about 30 degrees and makes for better stability on the ocean. The added rocker curve along the bottom of the hull gives the canoe quicker turning maneuverability. This steaming process is usually done for canoes over 20 feet in length. A team of 10 to 15 people is a good number of helpers to have for the steaming process. The steaming process involves mounting the canoe up on two points, putting a few inches of water in the canoe, building a big fire fire, putting in about 50 rocks until they are red hot, and then putting said rocks into the water in the canoe. Some rocks are also put under the canoe into a little trench that has been dug, where water is poured on them. Then a covering (these days usually tarps)  are put over top to keep the steam in, which makes the wood pliable. Wedges pointing toward the middle are tapped under the mounts of the canoe  to add rocker to the hull. Braces may be used to help spread the edges and increase the beam width. Click here for a short video about a canoe steaming with Joe Martin by Jackie Windh.

Next in the process are the finishing touches. These are details like giving the inside edges a nice adze finish, sanding, putting seats in, painting, adding rub rails, putting in a doe nut for a sail, and adding short pieces of bronze metal along the bottom as extra protection to stop the wood from wearing out when the canoe lands onshore.

After the canoe is complete there is a blessing and naming ceremony. The canoe is launched for the first time and gets its first taste of water. Each canoe is unique and handles a little differently from the last one. 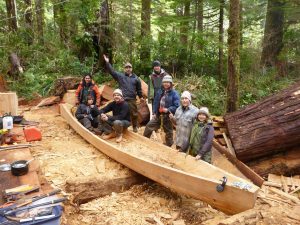 Joe has carved Nuuchahnulth style traditional canoes for museum exhibits, carving festivals, his daughters, other Nuuchahnulth nations (including for the Makah so they could resurrect their whale hunting practice) and Nuuchahnulth families.

The significance of the dugout canoe is such that it has become a symbol  of  Nuuchahnulth culture and pride. It is the vehicle which Nuuchahnulth accessed their territories from. A resurgence of canoe travel culture has emerged with the creation of modern canoe tribal journeys; which necessitates these traditional canoes for multi-day inter-tribal journeys to a common destination each summer. There is also an increase in the use of canoes for ceremonial and practical purposes as more canoes are made and distributed.

The basic Nuuchahnulth canoe design has remained unchanged for as long as our people can remember.

The canoes are built with a high bow which enables landing on surf beaches. The canoe is backed in towards the beach with the bow facing incoming waves. The waves split off the high bow and don’t swamp the canoe.

The hull shape is a fine-tuned with a gradual swell which is conducive to retaining speed. Nuuchahnulth people were able to hunt various kinds of whales from these canoes. The whales were often much larger than the canoe and could tow the canoe on rough seas. The favored size for a whale hunting canoe is 32- 35 feet. 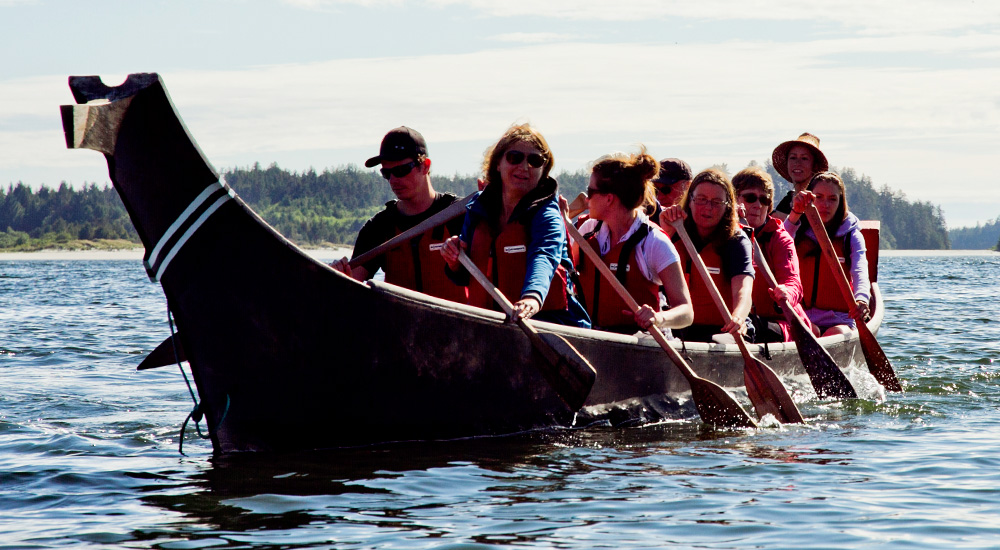 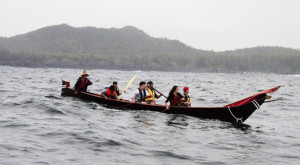 The red interior of the canoe represents life, the colour of blood because the canoe is an access tool for resources providing life. The outside is traditionally singed black and comes from the whale hunting canoes. This is done to look like an orca whale, which is a dominant ocean creature. If a whale knows it’s dealing with a canoe, it can easily decide to smash it, but if the whale believes it’s dealing with an orca it will be more afraid and less likely to mess with the canoe and it’s crew. The prow piece has a groove carved into it to hold a harpoon or sail mast. The white stripes at each end are for peace when travelling through other tribes territories.

At this point in his life Joe has carved over 60 canoes and is still going strong. He has won awards for his carving works including BC creative achievement award. He also holds a place in the book “Builders of the Pacific Coast” and the “BC almanac book of Greatest British Colombians”. Joe’s more traditional way of life includes not only carving canoes but attending and participating in pot-latch ceremonies. He also continues to harvest and share traditional foods. Joe is a steward of his home territory, which continuously faces environmental degradation. Joe has travelled to Japan and Germany to speak and raise awareness about the issues facing his homeland in the globalized world.

We are very happy that the art and teachings have survived the past 200 years. Because of European colonization, forced assimilation programs, and globalization, the years since non-native settlement have been very trying for Nuuchahnulth people and culture. A lot of the Nuuchahnulth knowledge and way of life has been altered by the church and/or lost from memory. We are very grateful to have what remains of culture including the cultural art of canoe carving alive and strengthening.

In the early days of his canoe carving career, Joe and his brothers Carl Martin and late Bill Martin would work on canoes together. More recently, Joe has been working with younger students who are keen to learn the art. One canoe was completed in Heshquiaht territory by Heshquiaht members Steve Charleson and his son Josh Charleson. This was shortly after Joe taught a canoe carving course there. Another canoe was made last fall (2013) by two young men from the Seitcher family. They got involved with learning to carve the canoe with Joe, and following that event they made a canoe on their own with a little coaching afterwards. Now they have become Joe’s main helping hands and they are working together with him on a current canoe being built for the Ucluelet nation. This is exciting because for many years there weren’t any young Nuuchahnulth people taking up the art; and now they have come forward and are helping keep this important cultural practice alive. 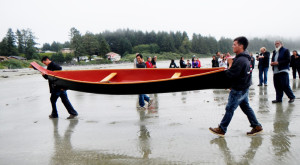 Matt and Eric Seitcher and their first canoe. Joe Martin in the background.